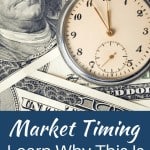 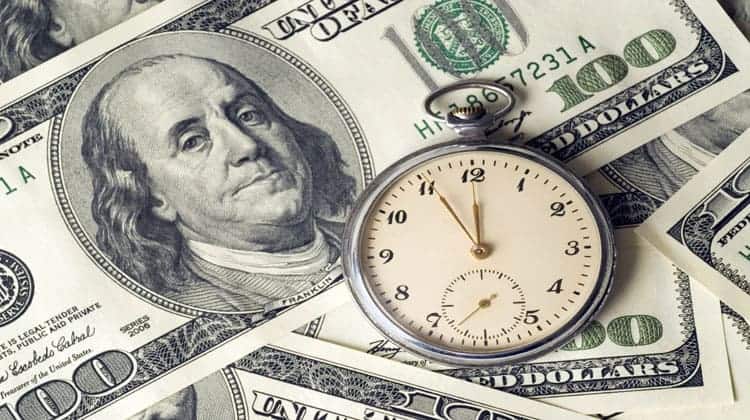 Market timing is a great strategy if you know what the market is going to do and when.

The problem is most people (if not everyone) do not know when the next market downfall or bull run is going to happen.

Nevertheless, there is another option.

What if you just waited to start investing? What if you held onto cash and waited for the market to drop of 15% (or 10%, or 20%) and then you jumped in right when the market was at its lowest point.

We’ll dive into that analysis and see if it works, but first, a primer on stock market timing and why it’s so enticing.

What Is Stock Market Timing?

Market timing is exactly what it sounds like. An investment strategy that involves putting money into and pulling money out of the market at certain times to maximize your investment.

Usually, advanced market timers rely on timing signals or a formula or algorithm to help determine when the market is down and when it is up.

In hindsight, when using these market signals it’s easy to see the many peaks and valleys of the stock market and imagine buying and selling at the exact right times.

Though, it’s much harder to predict in the present moment.

Does anyone really know when the market is going to go up or down? I doubt it.

How Do Average Investors Time The Market?

As mentioned, market timing works when you buy the lows and sell the highs.

There are many technical strategies that professional stock traders employ to try to time the market.

They can do complex timing signal analysis with 50 or 200-day moving averages to guess whether or not we are in a bull or bear market.

Though, this analysis is beyond the means of most average investors.

Instead, most investors look at a simpler market timing strategy.

Say you’ve been waiting to invest your first $10,000. Or you just got a nice bonus from work and aren’t sure if you should dive right in or wait for the “right time to invest.”

It’s a good question to ask yourself and we’ll dive into the analysis now to see if you should take action or try to time the market.

So, the headline spoils it. Market timing does not work, usually.

Instead, I looked at a common market timing strategy. Hold your cash until the market drops 15% from it’s previous 5 year high. Then, invest!

I ran a bunch of scenarios with the following assumptions.

Each month represented a period of time in which you could start investing, or wait for the next month to see if you got that market dip. And so on.

In 73% of those scenarios you would be better off investing now rather than waiting for a market dip in some future month. 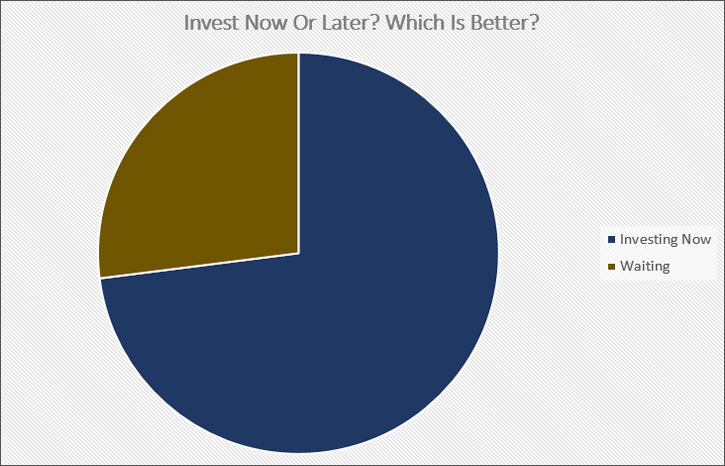 That means in 27% of scenarios, barely of one quarter, you would come out ahead by waiting for a 15% dip to invest.

Most of the time, the market just keeps going up!

Usually, by the time the market dips 15% from its previous 5 year peak, it’s already long surpassed where the market was when you first decided to wait.

The end result is you would be better off using a buy and hold strategy over market timing.

Just look at the 2010 decade so far as an example.

This is what the market looked like starting in 2010. It’s been a good decade so far for non-market timers. 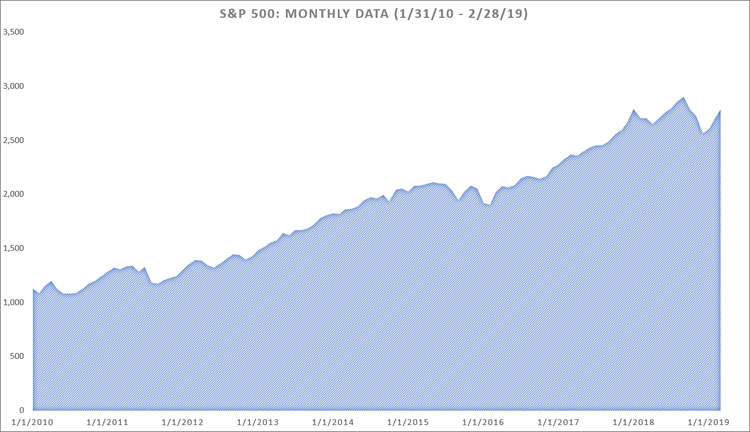 That’s right, the market never dropped 15% from it’s high in the current decade so far!

You’d be stuck still holding onto your cash while your neighbors more than doubled their money!

The market was slightly more volatile in the early 2000s thanks to the internet boom (and crash) and the housing crisis in 2009. It’s often referred to as the lost decade. 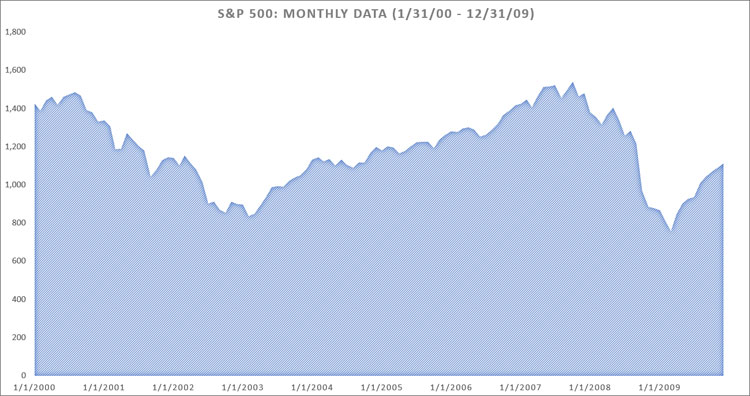 As you can see from the graph, the market took a nose dive right at the start of the decade.

So in this scenario, you’d be better off if you would have waited for the 15% decline. You’d end the decade with $9,364. 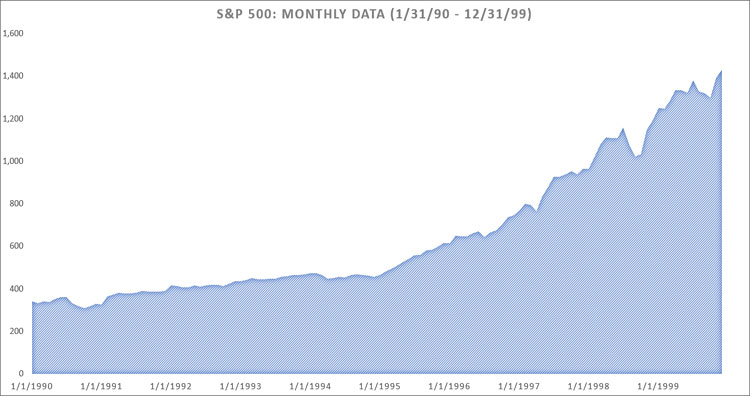 Up to now, we’ve been looking at 10 year periods to get to the answer as to whether or not market timing works. And for most examples, it does not work over these long periods of time.

In fact, you can expect to get positive returns 87% of the time by simply buying and holding your investment for a long time.

However, if you try to time the market and go in and out in 1 year, you are only 69% likely to get positive results.

That is a lot of work for a worse success rate.

But what if we looked at smaller periods of time?

There are cases where timing the market would work.

But you would have to buy in on the days when the market dropped significantly. And during these times, no one knows where the bottom is going to be.

Here are the biggest swings in the S&P 500 during this time.

On the day the S&P 500 Index lost over 100 points, you might think to buy. But you might not, thinking the market is going to drop farther.

The point is, to time the market and make money, you have to be lucky. Missing out on just a day or two can turn profit into losses.

Yes, there are examples of market timing working. Actually, there are 322 of them in the past 100 or so years of investing (when looking at opportunities monthly).

The bottom line is, the times that market timing worked are rare. They only happened in 27% of the months examined. You have better odds in Vegas!

In the vast majority of cases, you are better off in the long term if you invest your money today rather than trying to time the market.

Other Downsides To Market Timing

The market timing scenarios we looked at only included buying at market lows. There are some who seek to then sell at market highs too. And then repeat the process.

Again, I think you’ll find the same success rate with selling at highs as you saw with buying at lows.

You also might miss out some great gains when you sell at what you think is a high but is really just the start to a long bull run.

Besides that though, there are two other factors to consider.

As I’m sure you guessed, short term capital gains tax is more expensive.

Timing the market only works 27% of the time when you are waiting for the next market dip.

The caveat is, if you somehow know when the market is going to go up or down, of course market timing will work!

In that case, you’ve got the magic bullet! And theoretically you can make unlimited amounts of money with this knowledge.

The issue is, though many people may think they do have this information, I don’t think anyone has the knowledge of what the market will do next.

And as a result, most of us are stuck with a 27% chance of success.

Hi, my name is Jon and I run Compounding Pennies. I've been interested in personal finance since high school and have both my undergraduate and masters degree's in finance. I also have a Certificate in Financial Planning and am licensed by FINRA. I've spent over 15 years in the financial services industry helping people with their finances. You can learn more about me in my About page.